The name Binfield was first noted in around 1160 as Benetfeld and is believed to have come from the Old English beonet + feld meaning ‘open land where bent grass grows’.

Formerly part of Windsor Forest until 1817 when an act of enclosure was passed, Binfield covers an area of 3,489 acres and still has an abundance of fine old woodland.

From the 1800’s up until the 1950’s brick-making was a major industry in Berkshire with Binfield Brick and Tile Company at Amen Corner (now the site of the Coppid Beech Hotel and the John Nike Centre) being a significant employer. Unfortunately during the Second World War Brick production more or less stopped and never really recovered afterwards and its railway siding east of Amen Crossing finally closed in 1965. The legacy of Binfield bricks can still be seen today as they were used to create many fine buildings, some were even used in the construction of the Royal Albert Hall.

The presence of a number of large houses in the Binfield area without supporting estates meant that many local tradesmen could make a decent living in the village and this led to the development of the working men’s club which was built by subscription in 1885. Binfield continued to flourish and prosper until the development of Bracknell New Town in 1950.

There are now 74 grade II listed buildings in Binfield of which 4 of these are grade II*listed; All Saints Church, Binfield Place, Binfield Park and Binfield Lodge.

The church was originally one of the chapels of the Royal Manor of Cookham, which covered an area as far away as Sunninghill, that was given to the abbey of Cirencester by Henry I. The church is now mostly mid-nineteenth century having been extensively remodelled in Victorian times, however, it does still retain some of its original ancient features such as a 14th century carved wooden porch. Another particularly interesting item is the hourglass made in 1628 with an ornate iron stand featuring the arms of the Farriers’ Company of London. In the south chapel, you can find a 15th-century window with glass depicting the figures of St. George and the dragon. Also worth of note is the half-effigy brass memorial in the chancel to Walter de Annefordhe dated 1361, which is the oldest in Berkshire.

The rectory was an impressive mansion behind the church, it is now a private residence with the new rectory situated in the centre of the village. In 1816 the famous painter John Constable honeymooned at the Rectory and during his stay made sketches of All Saints Church.

This is reputedly the oldest house in Binfield dating back to the reign of Henry VII. The building has been extensively altered over the years, it was originally an ‘E’ shaped manor but has since lost the whole of the west wing. However, it does still retain many 16th century and 17th century features. It is apparently home to a 17th century bas-relief plaque of a lady’s head known as The Luck of Binfield, which if removed is said to pour misfortune upon the perpetrator.

Built in 1775 for Onesiphorus Elliot Elliot, it became a military hospital in the Second World War and subsequently from 1949 to 2000 an NHS mental home. After the closure of the hospital the house remained empty for a considerable period of time and was in a very poor state of repair until relatively recently when it was refurbished and made into luxury houses.

Situated in Twyford Road to the north of Binfield bordering the parish of Waltham St Lawrence. This is an early 15th century hall house and was originally one of James I’s hunting lodges. It is reputed that that Elizabeth I slept there as well as being host to many illustrious persons such as Cecil Rhodes, businessman, politician and founder of the De Beers diamond mine. Set in landscaped grounds the house was remodelled in the 18th century and then further extended and altered by Sir Edwin Lutyens in 1912.

Home to many generations of the catholic Dancastle family, who were friends of Alexander Pope who lived nearby, the manor house was sold in 1754 to Sir William Pitt who became Prime Minister in 1756. He then proceeded to build himself a new house on the site as well as Pitts bridge which carries Forest Road over the stream running though Binfield known as The Cut.

The oldest public house in the village is The Stag and Hounds which became coaching inn in 1727, prior to that it was a hunting lodge for the Windsor Forest and was reputedly used by both Henry VIII and Elizabeth I. It used to have an 800 year old elm tree outside it which was said to mark the centre of the Forest; unfortunately the stump was removed in 2004 after being blighted by Dutch Elm disease. Playwright Terrance Rattigan wrote “The Deep Blue Sea” whilst staying here in 1952.

Alexander Pope lived in Binfield at White Hill house from the age of 6 yrs old, until he moved to Twickenham in 1719, during his childhood he sang in the choir at All Saints church. The house was subsequently renamed Pope’s Manor has now been turned into offices for a major construction company. The grounds of the house now form Popes Wood and are free to be enjoyed by the general public.

Newbold College came to Binfield in February 1946 and the campus occupies an area of 90 acres. It comprises of a variety of buildings the oldest of which is Moor Close, a listed Jacobethan style mansion built in 1865. From 1911 to 1913 owner Charles Birch Crisp employed architect Oliver Hill to enlarge the house and create a garden which is also now Grade II listed. 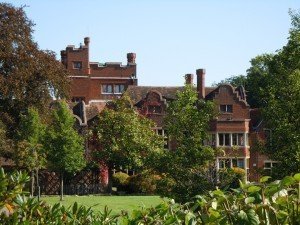